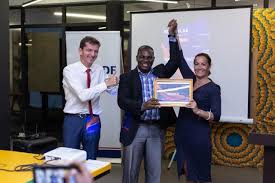 SETECH Ghana became the winner of the Ghanaian stage of the EDF Pulse Africa innovation contest on 17th September 2019 to represent Ghana at the Grand Finale in Paris, France in November 2019. The Award was issued by the France Ambassador to Ghana Mrs Anne Sophie AVÉ who was also a member of the Jury. The second and third Award went to Ray Solar Power and North lite Solar companies Respectively.

Created in 2017, EDF Pulse Africa challenge aims to reveal and support African innovators committed to the continent’s energy development. EDF has been present in Ghana since its launch three years ago.

The meticulous members of the jury, all coming from the Ghanaian economic-energy ecosystem, based their judgment on criteria such as project’s viability, impact on the society, and even their differentiation and their innovative potential. Among others, French Ambassador in Ghana Anne-Sophie Ave and Special advisor to the Minister of Environment, Science, Technology and Innovation Oliver Boachie were present to differentiate these promising enterprises. Stephen Essien, ZEGHA Managing Director, was invited to capitalize on his experience as a jury member as well as a panelist portraying the Ghanaian Solar Home System branch’s situation.

For this 3rd edition of the challenge, EDF has launched the EDF Pulse Africa Tour: an African tour spanning 7 countries of the continent, aimed at selecting candidates closest to their original economic context. The winner of each national edition is awarded a place in the Grand Finale, which will take place in Paris in November.

The third of the seven stages of the Tour took place in Ghana, this Tuesday, September 17, 2019. Five national start-ups were selected to compete in the Ghanaian final. They presented energy solutions in the following 3 categories: off-grid power generation; electrical power applications and services; access to water through the use of electricity (farming and drinking water).